Abstract
An online roundtable discussion entitled ‘Front-loading biosimilar development with analytical characterization’ was hosted by BioPharmaSpec. The panellists discussed different regulatory approaches to the clinical trials needed for approval and how this can affect structural and functional characterization; the best way to ‘front-load’ characterization in comparability studies; orthogonality and its role in reducing biosimilar development costs; and how to develop an integrated strategy for structural and functional data assessments.

Introduction
Since the legal frameworks for biosimilar approvals were established in Europe in 2003 [1] and the US in 2009 [2], the use and uptake of biosimilars has increased across the globe. There have now been many years of biosimilars development, and the process of getting this class of drugs to market is being continually examined.

Multiple global regulatory guidelines require in-depth analysis to demonstrate that the biosimilar is similar enough to the originator in terms of structure, composition, and in-vitro activity, in addition to clinical trials to compare pharmacokinetics (PK) and examine possible, clinical inequivalence. Questions are now being asked regarding the need for extensive clinical trials and whether it is more appropriate to front-load biosimilar drug investigations with risk-based analytics [3, 4].

BioPharmaSpec is a global contract research organization (CRO), led by industry experts in the field of mass spectrometry, specializing in the structural, physicochemical, and biophysical characterization of biopharmaceuticals such as biosimilars.

The roundtable was chaired by Dr Fiona Greer, an independent consultant with over 35 years’ experience in glycoprotein analysis and previously a founding Director of M-Scan and Global Director of Biopharma Services Development, SGS. Dr Greer was joined by three panel members, Dr Richard Easton, Technical Director for Structural Analysis at BioPharmaSpec, Dr Dan Mamelak, Founder and President of Custom Biologics, and Dr Marius Schmid Chief Executive Officer of Zentriforce Pharma. The panel discussed how detailed structural and functional investigations, as part of a comparability exercise, can be front-loaded in a biosimilar development programme to improve confidence levels in the nature of the biosimilar, reduce development costs and, in some circumstances if guidelines permit, reduce the requirement for full clinical trials. The premise of the discussion was that technological advances in hardware and software mean that detailed investigations can now take place in all aspects of primary and higher order molecular structure and the subsequent impact that any modifications can have on functional biological activity.

Roundtable key issues
During the roundtable, the following key issues were discussed:

• The different regulatory approaches to the need for full clinical trials and how this can affect structural and functional characterization.
• The best way to “front-load” characterization in comparability studies.
• Orthogonality and its role in reducing biosimilar development costs.
• How to develop an integrated strategy for structural and functional data assessments.

The panel members gave their opinions through their answers to the three questions listed below.

Certain regulatory authorities are taking a different view on the necessity of comparative clinical efficacy trials. How do you think this impacts the analytical and functional work performed as part of drug development?
Dr Easton was the first to answer the question. He highlighted the fact that traditionally, for a biosimilar to be approved, it is compared to an innovator reference product. However, now that many biosimilars have been approved, there is a large body of historical data on multiple biosimilars themselves. He noted that, in a post-Brexit world, the UK’s health authority is reconsidering biosimilar evaluation and the potential to reduce reliance on clinical trial data in favour of knowledge of structural and functional properties. To do this, structural and functional information must be very robust.

Dr Schmid followed on by noting that, when it comes to removing clinical studies, the question is: who will take the risk and do this first? Although the UK is considering removing the need for clinical trials of biosimilars, the United States Food and Drug Administration (FDA) and the European Medicines Agency (EMA) are not at present, so clinical trials will still need to be done for products to be approved outside the UK.

He also stated that, to expand biosimilarity study data, it could be possible to shift everything to a good manufacturing practice (GMP) environment, or to get larger statistical samples. However, he highlighted that neither seem to be completely necessary, but they might be an option to increase the trust in data. He also made the point that we have a lot of historical data on the biosimilars themselves and it might be interesting to compare new with old biosimilars as well as to reference products.

Dr Mamelak concluded the answers to this question by noting that regulatory agencies want to make it less expensive to produce biosimilars, thus reaching a wider market. With the changing approaches of some regulatory agencies, it is likely that the decision-making process will rely more on robust structure/function packages. This will help remove the need for animal and PK testing that are costly to perform and, it could be argued, unethical. Thus, moving forward, it will be important to rely on historical and empirical data.

What is the best way to develop a front-loaded characterization study? How can you build orthogonality into your approach?
Dr Schmid highlighted that, when carrying out structural assessments of biosimilars, accuracy is the most difficult aspect to assess and the need for orthogonal methods is key. He noted that, ‘aggregation analytics are often needed and it is common to perform three different techniques’. In many cases, orthogonal information can be obtained, but accuracy can be harder to achieve. He concluded by noting that one way to ensure accuracy is to run positive control samples.

Dr Mamelak noted that, although orthogonal tests are key for structural testing, there isn’t always the same need for orthogonal approaches in functional analyses. He noted, ‘with functional testing, molecules are received that are known to be structurally sound and the mechanism of action is what needs to be measured’. At this point in the analysis of biosimilars, orthogonal testing is no longer needed due to the emergence of very sophisticated recombinant cell lines that are used as the target cell line for these biological molecules. In reference to these assays, he concluded by noting, ‘if the molecule works the way it’s proposed to, the cell line glows and the glow is measured’.

He also highlighted that, although it is not important to carry out orthogonal tests within functional testing, it is important to qualify the assay against a reference product to ‘show that the biosimilar is similar’. When it comes to quality, it is important to run assays under good laboratory practice (GLP), or GLP-like, conditions. In summary, Dr Mamelak noted that the emergence of sophisticated recombinant cell lines and inclusion of a reference standard means orthogonal approaches to measure mechanism of action are not critical, which streamlines the functional characterisation plan and, in turn, reduces costs.

Dr Easton noted that orthogonality is crucially important for the structural and physicochemical types of analyses carried out by BioPharmaSpec. He highlighted that such tests are needed to produce a self-supporting dataset so that all aspects of the data can be relied upon. There are various orthogonal techniques employed at BioPharmaSpec, see Table 1. He noted, ‘to design an orthogonal experiment, it is key to understand what each technique can and can’t do so that you can deduce solid conclusions, a concrete package and in-depth knowledge of the molecule’. 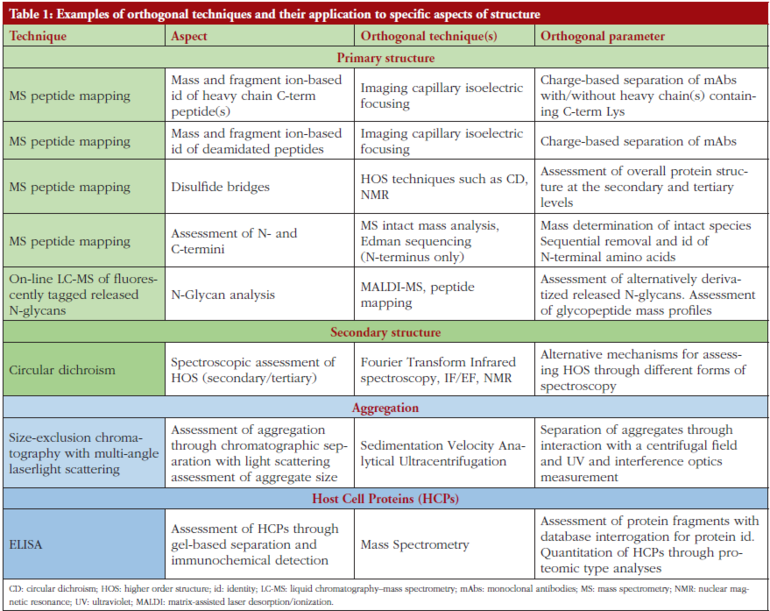 Dr Mamelak then added that, when it comes to functional testing, it is advantageous if the product’s structure has already been well-defi ned. When the comparability study is carried out within a cell-based assay, a curve is often produced to demonstrate how similar a biosimilar is to the reference. He shared the example of a comparability study of adalimumab biosimilar/originator behaving similarly, here the graphs overlap and thus demonstrate that they are behaving similarly. In addition, he remarked that the graph also showed that the structural analysis carried out to determine potential differences prior to the functional testing had been done very well.

Lastly, Dr Mamelak noted that in some cases, the buffer of the biosimilar can be different to that of the reference product and this can cause differences. Here, a cell-based functional assay is a useful tool to determine if there are any effects on functional properties, see Figure 1. 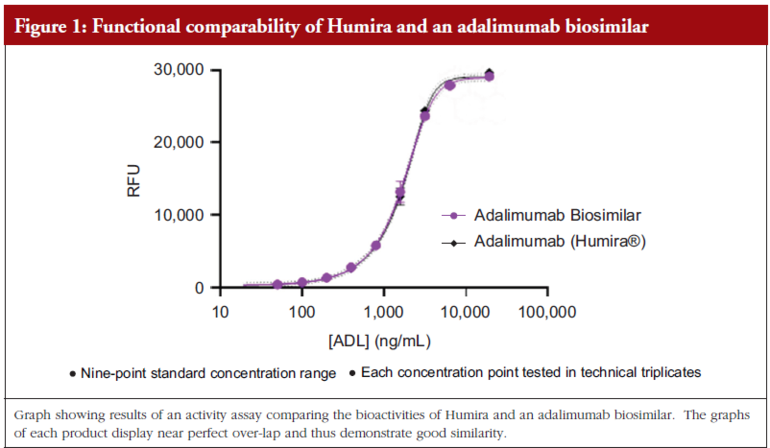 What is your experience of linking analytical characterization to function, i.e. an integrated strategy? What about the challenges of performing these correlations between the originator and biosimilars? Can you illustrate with examples?
Dr Mamelak highlighted that this question touches on the ‘holy grail’ of developing a biosimilar package. The structure and function analyses are the driving force that will bring the cost of developing biosimilars down. A good structure-function package with orthogonal approaches at the structural phases and well-designed functional characterization of the molecule is what the regulatory agencies want to see.

From a functional perspective, the main challenge is that the assay has to show that it can pick up subtle differences and must be able to confirm differences and similarities. An assay must be sensitive enough to show that differences can be captured, and any differences must be explained. He noted that it is important to ask: ‘Can the assay pick up differences in functional activity that are likely due to differences in structural properties?’ He then demonstrated this by giving some examples of cell-based bioassays. Overall, he stressed that a solid structure-function package is the key driving force to help bring the cost of biosimilar development down.

Dr Schmid provided a case study from aggregation analyses where a generic drug (cyclosporine) performed differently to the originator and they found, by examining oil drop distribution, that the issue was in the micellar structure of the Tween.

Dr Easton concluded the answer to the final question by noting that, to get a good understanding of the structure-function relationship, you have to know your assays and your product well enough to be able to understand any differences you might see and put them into the context of your development programme. Developing good lines of communication between the scientists carrying out the structure and the functional analyses is crucial to front-loading analytics and truly defining biosimilarity.

Conclusion
Dr Greer concluded that it is clear that detailed structure-function investigations as part of the comparability exercise can give great confidence in the nature of the biosimilar, providing information from which risk-based assessments can be made. Results from orthogonal methods can provide a meaningful insight into how similar the biosimilar is to the originator and potentially reduce the requirement for full confirmatory clinical trials. Overall, structural functional data should be viewed in tandem for full understanding in integrated studies to enable a reliable assessment of biosimilarity.

Funding sources
This paper is funded by BioPharmaSpec Ltd (www.biopharmaspec.com).

Editor’s comments
The roundtable discussed how biosimilar manufacturers might be able to decrease the number of clinical trials required for registration now that the UK is no longer part of the EU. It was noted that until/unless the FDA and/or EMA change their current approach the need for clinical PK, safety and efficacy studies is unlikely to be decreased by what has been proposed in the UK.

Next generation processing of monoclonal antibodies

Sourcing innovator products in the age of biosimilar research

Next generation processing of monoclonal antibodies

Sourcing innovator products in the age of biosimilar research