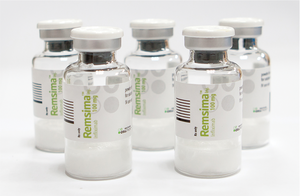 The Colombian Ministry of Health and Social Protection (Ministerio de Salud y Protección Social de Colombia) released a new draft guideline for biologicals, including biosimilars, in January 2013 [2]. The guideline provides for a ‘comparability pathway’ that permits approval of a producto bioterapéutico similar based on a comparison to a reference biotherapeutic product.

The Colombian approval of Remsima has been granted to Amarey Nova Medical by INVIMA – the equivalent to US Food and Drug Administration – which comes under the Colombian Ministry of Health and Social Protection.  Remsima is approved in Colombia for the indications of rheumatoid arthritis, ankylosing spondylitis, Crohn’s disease, ulcerative colitis, psoriatic arthritis and psoriasis – the same as those covered by the European approval.

Editor’s comment
It should be noted that productos bioterapéuticos similares approved in Colombia might not have been authorized following as strict a regulatory process as is required for approval of biosimilars in the EU. EMA regulatory requirements ensure the same high standards of quality, safety and efficacy for biosimilars as for originator biologicals, and also include a rigorous comparability exercise with the reference product.