Although growth in annual spending on medicines is set to reduce, there is still a huge market out there and spending on biosimilars is expected to increase in the coming years.

This growth in biosimilars will be driven mainly by patent expiries coming in the next 5 years, of which there are many. Between 2011 and 2015 a total of US$17 billion worth of sales in the US alone will lose patent protection, presenting a huge opportunity for biosimilar manufacturers to gain market share.

Figure 1: US patent expiries by market volume based on 2007 US retail sales 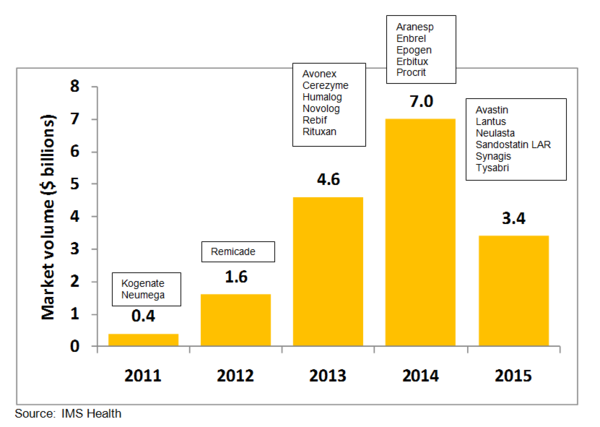 Blockbuster biotech drugs with patents soon to expire include Roche’s blood cancer and rheumatoid arthritis medicine Rituxan (rituximab) and Merck and Johnson & Johnson’s anti-inflammatory drug Remicade (infliximab). Patents on Rituxan expire in the US in 2013 and on Remicade in 2012, while both have patents expiring in Europe in 2014. Amgen and Pfizer’s rheumatoid arthritis drug Enbrel (etanercept) will already lose patent protection in Europe in 2012, with US patents expiring in 2014, see Figure 1. These three drugs alone are reported to have worldwide sales of more than US$5 billion annually [1].

Not surprisingly, considering the substantial gains to be made, many manufacturers have already seen the potential in the market and are working on biosimilar versions of some of these blockbuster biotech drugs.

Sandoz (the generics unit for Novartis) has started mid-stage trials on a biosimilar version of Rituxan (rituximab). While US-based Spectrum Pharmaceuticals started research in early January 2011 and Israel-based Teva had already started research back in 2010.

Merck has signed a deal with a Korean biotech firm to develop a biosimilar version of Enbrel (etanercept) [2]. While China-based Simcere Pharmaceutical Group has already received approval by the Chinese authorities for its biosimilar version [3].

The problem, however, in the US is still the lack of clear regulatory guidance.

Generics and biosimilars to drive down drug spending